A savvy and experienced owner sets his sights on just the right kind of cruising yacht, and the Horizon PC65 delivers

Richard Alexander knows all about the new Horizon PC65—he owns one. “I bought my first yacht in 2004 and didn’t know anything except that I wanted one,” he says, as a bit of a smile complements the sparkle in his eyes. “I picked it up in Fort Lauderdale, hired a captain and drove the boat to Texas where my wife and I lived. That’s how I learned a couple of things and very quickly after that, a lot more.” 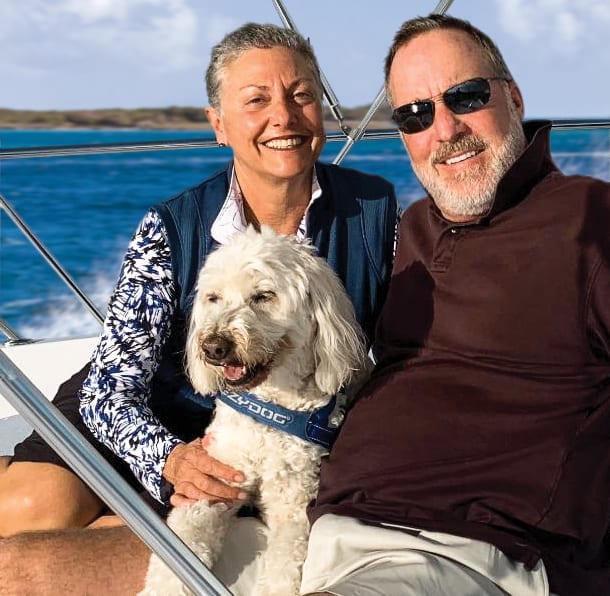 With retirement coming some four years later, the Alexanders divested everything terrestrial, moved on board and began cruising. “The family was grown, out of the house and taken care of, and we wanted this time for ourselves,” he says. “We were so committed; we were able to flip boats every year for the next three years. The travel and lifestyle were as good as it gets.”

When they decided to put their then-owned 84-footer on the market, these sufferers of terminal wanderlust began to look for something really special and the right vessel that would fit their particular needs. That’s when they found Horizon Power Catamarans.

Innovation on the Horizon

Since 1987, and under the visionary tutelage of co-founder and naval architect John Lu, Horizon has consistently pioneered innovative advances throughout the industry and garnered a well-deserved reputation for its sophisticated craftsmanship and building techniques across its wide-ranging model lineup. The design and development of the PC Series (PC for Powercat Company) is the successful and impressive collaboration between Horizon Yachts, designer J.C. Espinosa, naval architect and catamaran specialist Angelo Lavranos of Lavranos Marine Design, and Stuart Hegerstrom and Richard Ford of The Powercat Company.

Alexander, an engineer by profession, including an eye for design, knew he had found something special when he first toured a Horizon PC. After several trips to Taiwan and building the PC52 hull number two followed by a PC60 Skylounge, it wasn’t long before the noted builder’s PC65 came into sharp focus.

The ability to interface directly with the yard was a big plus for Alexander and enabled him to not only get what he wanted but also what he needed. “As far as I am concerned, the level of detail Horizon goes to is unprecedented,” he says. “My boat, as with all the others they build, is a shared effort, and it shows all during the build. They even paid special attention to the fact that we travel with our dog.”

The hull of the PC65 is a new design and not just a lengthened 60 or dammed up 74. It is engineered and designed to handle the weight. At 52 tons, she upgraded from the CAT 850-hp offering to a pair of 985-hp CAT C12.9 diesels with two Onan 21.5kW generators. The design also achieves the necessary and efficient cruising speed for their needs (24 knots at 80-percent load with less than 3.5 gpm, according to Alexander) and provides abundant storage, entertainment, dining, and food preparation space as well as everything else the wide-range cruising Alexanders require. The Alexanders enjoy extended time at sea, so the boat is designed to run efficiently at half load.

The hull is hand laid and then bagged, after which it is resin-infused for optimum strength-to-weight ratios. The bows are reinforced with carbon fiber to the keels and the stringers are bonded and foam-encapsulated. As with everything on this boat, strict attention to quality control and detail starts from day one, through launch and continues long afterward.

There are 750-gallon fuel tanks in each hull and a 300-gallon water tank on the port side. “When it came to my port side water tank, I am about a half inch low when full and when empty, high for the same value,”

Alexander explains, meaning that Horizon engineered the boat to have the hulls balanced whether the tank is full or empty.

The PC65 is a big boat and given her 24-foot, 6-inch beam, she shows much bigger than her measured 65-foot length and offers an opportunity for the owner to customize her interior and maximize use of her exterior space.

A pair of wide stairways from the swim platform offer access aboard. The aft main deck features a spacious dining and entertainment area that takes full advantage of the yacht’s wide beam. Walkways on either side lead to the bow, and there is an easy-to-navigate staircase from the aft deck up to the bridge deck. With the Alexander’s skylounge upper deck option, there is also an interior stairway starboard that leads directly to the galley/salon area. Two separate steering stations to port and starboard on the aft deck provide close-quarters docking. A pair of large hatches in the deck allows access to the engine room space that has plenty of room for all critical engine checks and maintenance. 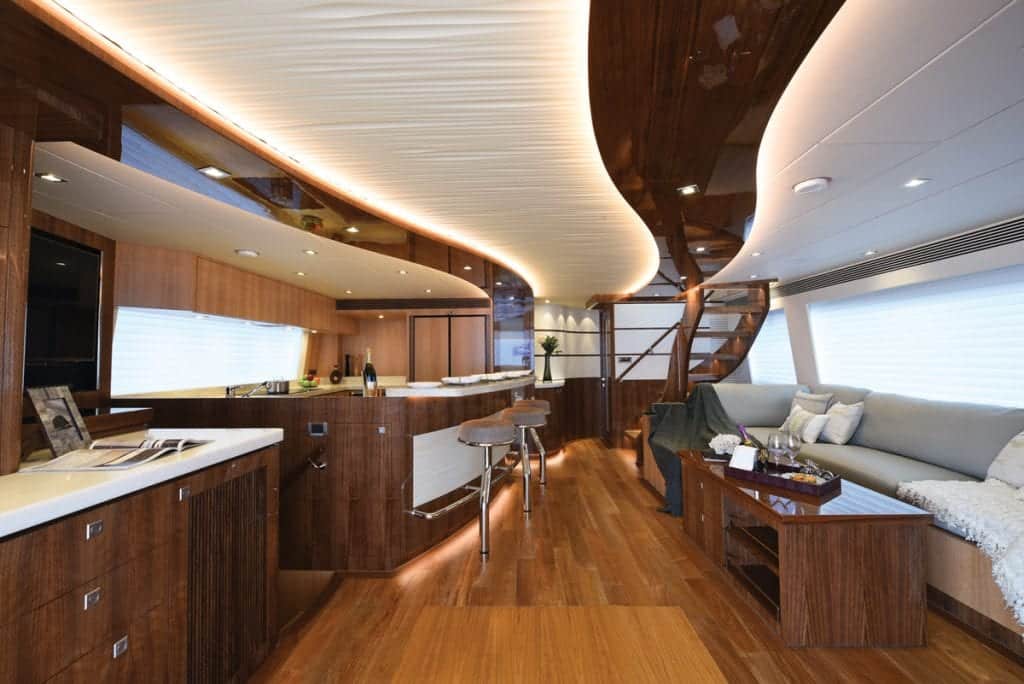 Topsides, the enclosed Skylounge model (the Flybridge model is open on each side)  creates its own separate room and given Alexander’s cruising lifestyle, suits them well. Fully air-conditioned and comfortably outfitted with an impressive and fully laid-out centerline helm with Stidd pedestal seats, it features an entertainment center with galley and bar, refrigerator, and day head, the kind of space that adds an important dimension to the yacht’s mission.

“When we’re running, I can get her on autopilot, turn on a football game and watch it on my Garmin screen and with the dog curled up on the couch, either of us can cook a light meal and be really relaxed by the time we get to where we’re going for that day,” says Alexander. Outside on the large aft deck is a cabinet for an electric smoker, storage space, seating, and room for the tender and ES1500 Steelhead davit.

“We had so much room to work within the salon, we were able to move the aft glass sliding door inward some two feet and still create the kind of space we wanted in both places,” says Alexander. “My wife and I like to dance while dining alfresco.” The couple wanted a personal statement for the interior and worked closely with the Horizon team. Dramatic curves highlight a fabric headliner and balance a full galley to port, curved counter for informal dining and seating to starboard.

The attention to detail in the high-gloss walnut woodwork and décor typifies the builder’s abilities. In fact, once entering the salon, your eye is encouraged to naturally follow the design forward to where the main deck master suite is located. The centerline, full-beam master suite offers spacious and elegant quarters dressed with beautiful cabinetry, plentiful storage, separate toilet with basin and cabinets, separate walk-in shower, and a portrait of their dog adorning a bulkhead.

Living accommodations in each hull are accessed via stairways to either side. The port stateroom offers large quarters, ensuite head and, as with everywhere aboard this yacht, more than enough storage for extended times away from home. Equally sized staterooms, each with ensuite heads, are on the starboard side. Both sides are extremely well-appointed and surrounded by expert woodwork, tasteful décor and the kind of presentation one would expect from Horizon.

“Our boat is truly a custom Horizon,” says Alexander. “When Richard and Stuart offered us the chance to be a part of the inaugural build for the new PC65, my wife and I jumped on the opportunity, and we have no regrets. This PC65 version of POMBOO is our seventh large motor yacht, and the family at The Powercat Company and the Horizon Yacht Company in Taiwan did not disappoint. We had requests above and beyond that pushed installations of equipment to places that another builder might not have been able to do, but as you can readily see, they not only achieved it but did it right.”

The Alexanders plan to live on board and spend time in The Bahamas before heading up to Maine for the summer. Eventually, they’ll ship her to Sydney Harbor, Australia, for a year’s travel before returning to the U.S.—the goal to stay water-bound for 5 to 10 years before they are ready to return to terra firma, but who knows? Perhaps there’s a larger yacht on the horizon from this prominent builder.