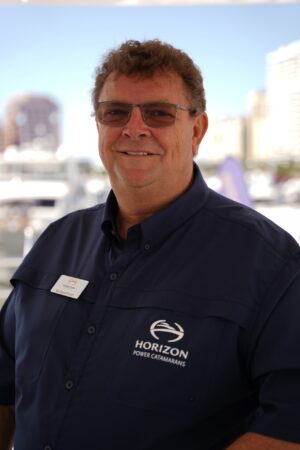 Richard Ford started his sailing career when he was 8 years old. He and his father built a small sailing dinghy in the back yard and this was the start of Richard’s passion for all things nautical. Richard spent his years growing up in South Africa, sailing and sailboat racing.

From 1986, Richard started his career in yachts when he sailed from South Africa to Greece and joined the International charter industry as a deck hand.  Over the years, he went from strength to strength, and was a successful charter captain for many years.

Having designed and built yachts in various countries around the world, Richard has learned that there is no discounting quality.  From a 63’sailing monohull to Sailing cats, then came the Power Cats.

In 2009, Richard, together with Leigh and past yachts owners, began a project to develop a 60ft power catamaran with the production and finish of a mega yacht. Hence, the Horizon PC60 was born. Richard awarded the build project to Horizon Yachts in Taiwan. Since Debuting the Boat at the 2011 Ft. Lauderdale Boat Show, 22 new PC60’s have been sold, 21 PC52’s, 3 PC65’s and 1 PC74. Richard is confident that his Powercat projects will continue to redefine Yacht Design and Purchasing well into the next Decade.

Packing 35 years of sailing, chartering, design and boat building experience, Richard has an intense understanding and gauge of the yachting market. This has been his avenue to creating one of the worlds’ most sought-after luxury power catamaran. A glowing testament to his dedication.